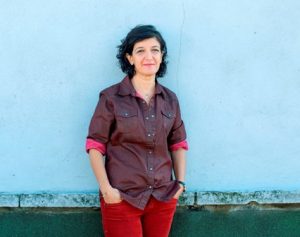 Gaye Boralıoğlu was born in Istanbul. She studied Systematic Philosophy and Logics at the Faculty of Arts and Letters of the Istanbul University. She took various jobs as journalist, copywriter and scriptwriter. She wrote the scenario of several TV series and movies including the “September Storm”, a legendary movie directed by Atıf Yılmaz. During the 1980s, she was prosecuted and jailed due to her political ideas at odds with the military regime. She participated in various NGOs as founder and political activist. Her first story book Hepsi Hikâye (All Story) was published in 2001. Her first novel Meçhul (Unbeknown), based on pictures, was published in 2004 and was followed by Aksak Ritim (Syncopated Rhythm) (2009), İçimdeki Ses (Sound Within Me) (2013) and Mübarek Kadınlar (Holy Women) (2014). Hepsi Hikâye was translated into Kurdish and Arabic; Aksak Ritim was translated into Arabic and German (titled Der hinkende Rhythmus). Meçhul (Der Fall İbrahim) and Mübarek Kadınlar (Die Frauen von İstanbul) also translated into German. Aksak Ritim was awarded with Notre Dame de Sion Literary Prize and Mübarek Kadınlar was awarded with “Yunus Nadi Story Prize”.  A story titled “Mi Hatice”, which takes place in her Mübarek Kadınlar, was adapted into film by Denis Durul Metin and awarded with several prizes. Her next novel Dünyadan Aşağı (Down From the Earth) is published in 2018 was awarded with “2019 Duygu Asena Novel Prize”. Her last story Alametler Kitabı (The Book of Omens) is published in March 2021.