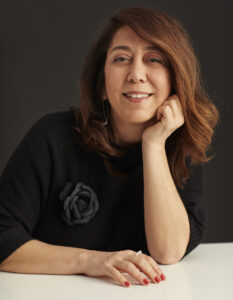 is an award-winning children’s book author living in Istanbul, Turkey.  After graduating from Bosphorus University (Istanbul, Turkey) with a degree in Psychology, she obtained an MBA from Duquesne University (Pittsburgh, PA, USA).  She then worked in two different multinational companies active in cement and iron & steel industries.  She began writing stories for children after becoming a mother in 2001. In 2006, she finished a certificate program at Bilgi University (Istanbul, Turkey) on writing stories for children. In 2007, the National Turkish Radio and Television chose her radio play called “Three Scoops of Ice Cream” as the best audio play for children. In 2010, “I Looove Animals!” received the Jury Special Award in the Best Picture Book of the Year category from the Turkish IBBY.  Her book called “Lazy Fish” was chosen for the White Ravens catalog in 2015 and “Mistik, We Don’t Understand You!” received Nami Distinction Award in 2017, as well as a Diploma Award for Image of The Book International Contest of Russia in 2019. Her book series called “Stories from Leyla Fonten” sold more than 250,000 copies since 2014. Currently, she has 25 books published in Turkey and some are translated into Italian, Spanish, Catalan language, Polish, Kazakhstani language, Azerbaijani, Russian and Chinese. Kozikoglu also conducts creative writing workshops for children and trains teachers on how to teach creative writing to kids.