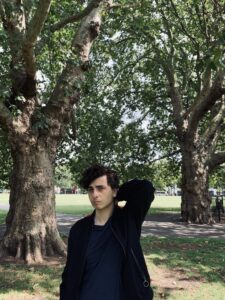 was born on 1990 in Alanya, Turkey. He holds a BA degree in International Relations and an MA degree in Film and TV. Having worked as a television journalist first, then as a lecturer, Can moved to London in 2017 to pursue a PhD at King’s College London. His scholarly work focuses on televisual storytelling and internet television.

Can has published two books, Gokyuzune Dusen Kiz and Yeryuzune Bakan Adam with the publisher YKY in Turkey. His third book, Yeryuzune Bakan Teleskop will be out in 2021. His poems have been deemed ‘commendable’ by the jury of Memet Fuat Young Poet Prize in 2011. He frequently contributes to magazines and websites such as Kafasina Gore Magazine, Marsandiz Fanzine and kayiprihtim.com with short stories, poems, reviews and long-form articles.

He currently resides in London.