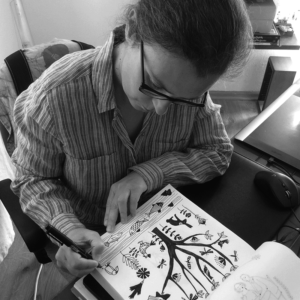 Deniz Üçbaşaran has a degree in Graphics Department in Fine Arts Faculty of Marmara University. Her first picture book Kırmızı Kuş (The Red Bird) was published in 2003. She continues illustrating picture books and Piraye’nin Bir Günü (A Day of Piraye) was chosen as a Best Illustrated Story Book by ÇGYD (Turkish IBBY) in 2014. Piraye’nin Bir Günü and Şapkadaki Balık (The Fish in The Hat) were qualified to take part in IBBY Honor List in 2016 and 2019. One of the illustrations of Mevsimlere Güzelleme (Lyrics to Seasons) was selected for the anthology of 2019 Der Kinder Calendar that was prepared by International Jugendbibliothek in Munich.  Her first picture book was chosen to prestige list to White Ravens 2019 with Annemin İçindeki Ses (The Voice Inside My Mother). She has contributed with her creations to Child World’s Illustrators Museum project that was established as a permanent exhibition in İzmir at 2016. She has illustrated dozens of story and poetry books written for children until today.