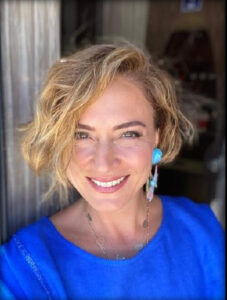 Ceyda Şakrak (Ceyda Düvenci), was born in April 16, 1977 in Bursa, Turkey. She started to perform as actress and presenter in TV’s in 1995. She was selected in the third row in Miss Turkey 1997. She graduated from Marmara University Faculty of Economics and she did her master’s on acting at Kadir Has University. She still continues her education on child development at Istanbul University.

Some TV series that Ceyda acted in such as Umutsuz Ev Kadınları (As known as Desperate Housewives), Maral: En Güzel Hikayem (As known as Panda and Hedgehog), and Binbir Gece have been broadcast and broadcasting on lots of international platforms.

Ceyda Şakrak, as well as her acting career, owns a company called, “Taş Kağıt Makas Emotions Atelier” which teaches and working on basic emotions to children and their parents with Turkey’s leading drama educators and psychologists. This organization continues its training online on Zoom and Instagram platforms due to the pandemic we are in.

Ceyda Şakrak, who is also an Creative Drama Educator and influencer in many fields, has 2.7 million followers on Instagram and 792 thousand followers on Twitter.