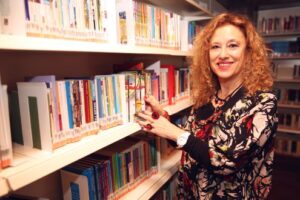 Becoming an author or poet was Aytül Akal’s childhood dream. Starting off with Hayat Magazine in 1974 and going forward with Elele Magazine, she has written more than 150 books consisting of novels, tales, poems, stories, plays, and picture books.

Her first literary work was a poetry book (1982). After publishing her first children book in 1991 (“Geceyi Sevmeyen Çocuk” aka “The Child Who Doesn’t Like the Night”) she devoted her life to writing children and juvenile books. In 1995, aiming for publishing qualified children and adolescents books, she cofounded Uçanbalık Publications which later joined within Tudem Publications.

Her work had coverage in widely acclaimed magazines & newspapers and have appeared in school textbooks. She had columns in various publications. From 1997 onwards, she launched books for children and juvenile on Cumhuriyet newspaper’s book supplement.

While giving lectures, developing social projects, and autographing her books, she aimed to cultivate the reading habit in Turkey.

In 2012, 5th National Children and Adolescents Literature of Living Writers themed series of symposiums have made a meticulous study of Akal’s works for 3 consecutive days between May 9-11. Her works have been a research subject by academics in several books.

Akal’s 43 books have been translated into German, Bulgarian, Hungarian, English, Spanish, Persian and Arabic. Regarding her 16 books published abroad only in 2015, Turkish Exporters Association granted 2015 Turkish Electro Technology (TET) Export Success Award to her in 2016.