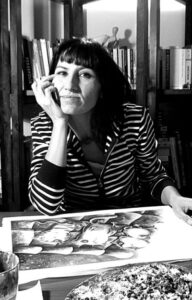 Ayşe İnan was born in Ankara in 1972. She has graduated from Hacettepe University Fine Arts Department in 1994. She worked in various newspapers, magazines and publishing houses as an illustrator, graphic designer and also as a cartoonist. A title she illustrated named Who is Afraid of Little Red Riding Hood received the Best Picture Book of the Year award in 2009 by the Turkish IBBY. She was selected to IBBY Honour List in 2011 for the title named The Beyoğlu Adventure.