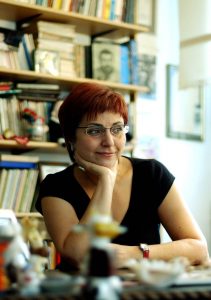 Buket Uzuner is a Turkish writer of numerous novels, short story collections and travelogues.
She is an environmentalist by education and animal activist known by her continuing national campaign for anti-Dolphinariums in Turkey.

Her books have been translated into 10 languages and her international best-selling novels: “A Gallipoli Soldier’s Secret” sold half a million copies only in Turkey and when published by Antares Publisher in New Zealand in 2015, it was an instant best seller for 6 months in NZ. The original title of the novel is “The Long White Cloud-Gallipoli”

Ms. Uzuner’s other novel “I am Istanbul” (original title is: “Istanbulians”) was chosen the novel of the month at “Seville Book Fair” in Spain and was chosen one of the most notable translation in USA by World Literature Today (WLT) in 2013.

“The Sound of Fish Steps” won “Yunus Nadi Novel Prize” and “The Mediterranean Waltz” was chosen the best novel by Istanbul University in1998.