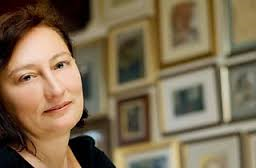 Perihan Mağden was born in Istanbul in 1960. After graduating from Robert College of Istanbul, she studied psychology at Boğaziçi University. By her own account, she was an unruly student—and her mother was proud of it. One of the most famous writers in young Turkish literature, Perihan Mağden has spent some time at Yaddo, the famous artists’ community. She spent some years in Far Eastern countries. Mağden is a single mother and lives in Istanbul.

In addition to writing editorial columns for Turkish newspapers, Mağden has published novels and a collection of poetry. Mağden’s novel Two Girls, published in English in 2005 by Serpent’s Tail, was praised for pushing “Turkish beyond its conventional literary patterns” and compared to J.D. Salinger’s Catcher in the Rye for the way she had captured adolescent anguish.

Her novel Two Girls was a big success in Turkey and became an award winning movie premiered at the London Film Festival.

She is an honorary member of English PEN and winner of the Grand Award for Freedom of Speech given by the Turkish Publishers Association.