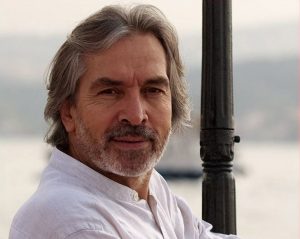 İskender Pala was born in Uşak in 1958 and received his undergraduate degree from the faculty of literature of Istanbul University in 1979. He received his Doctorate in Ottoman Divan Literature from the same university in 1983. His short stories, essays, academic papers and newspaper columns have inspired his readers to see Divan literature in a new light; his Ottoman Literature seminars are widely attended. İskender Pala is revered for his love of Divan poetry. He is the recipient of the Turkish Writer’s Association Prize (1989), The Turkish Language Foundation AKDTYK prize (1990) and the Turkish Writer’s Association Essay Prize (1996). He was given the title ‘The People’s Poet’ by popular vote in Uşak. His books Death in Babylon, Love in Istanbul; Katre-i Matem and The King and the Sultan, Od and Mihmandar have won numerous literary awards and enjoy a wide readership. Honoring his success, The Turkish Patent Institute has registered İskender Pala as a brand name. He was granted the 2013 Presidential Culture and Arts Grand Award in literature. İskender Pala is married with three children.

Barbarossa - The Story of a Legend, English, Kapı Publishing, 2014