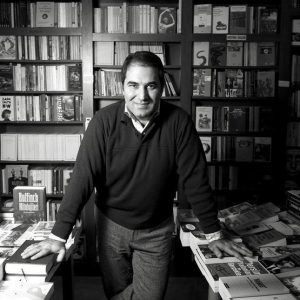 Born at 1972 and lived in İstanbul till then. Graduated from Kadıköy Anatolian Highschool (1989) and Marmara University Business Adm. Dpt. (1993-Education in English). Married and have two children.
After working at various international companies (Total, Iveco, Aksa Generators) as a manager, he has been dealing with literature full-time as a writer and translator till 2014. By Irish Literature Exchange bursary residence, he studied on Finnegans Wake translation to Turkish and FW (full volume) was published in Turkey by 2016, Turkish being the 7th language for that masterpiece. He was awarded both IKSV Talat Sait Halman prize and Dünya Translation prize for that translation at 2017.
His stories of which most are rewarded at various literature competitions and some published at literature magazines were collected at Ara Nağme and the same book was awarded 2014 Orhan Kemal Story Reward which is one of the most prestigious rewards in Turkey. His novel Kapalıçarşı/Grand Bazaar also won 2015 Ahmet Hamdi Tanpınar Novel Reward and was published by Hep Kitap. His book for children Haydar Pasha’s House was also awarded by Ankara Chamber of Architecture and published at 2013. His other novels are Aynalı (2011) and Anarchique (2014). He also have a serial children book Dreaming is Gratis (2014) and translations from English – James Joyce, Henry James, Paul Beatty and Oscar Wilde, from Italian – Luigi Pirandello and Italo Svevo. His novel Anarchique was also staged.
B