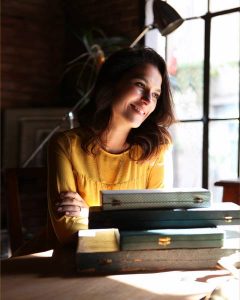 Aybike Ertürk was born in Istanbul in 1979. After Kalamış High School, she graduated from Ankara University, Faculty of language history and geography journal of anthropology, Department of English Language and Literature. Between 2002 and 2004, she worked as a text writer for agents. In 2004 she continued her career as a screenwriter and wrote scripts for TV series. Ertürk’s first novel, which breaks her TV career to make it possible to write freely, is “Miss None” published in 2015, her second novel “Vodka & Pera” was published in 2016 and her third novel “Arrogant Palm Tree” was published in 2020.