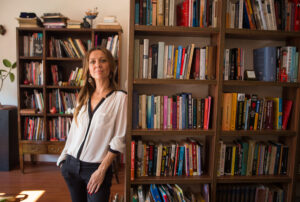 Aslı Perker was born in Izmir and throughout her school years moved all around the country because of her parents’ jobs. She graduated from the Faculty of Arts and Sciences, American Studies Department at Dokuz Eylul University. She started her writing career at an advertising agency as a copy writer and then turned to journalism. She worked at Aktuel News Magazine and Radikal, Yeni Binyil and Sabah Newspapers. After relocating to New York in 2001, she worked as a translator/interpreter and started focusing on her literature career. Her first novel, The Scent of The Other was published in 2005. Her second novel The Executioner’s Graveyard followed in 2009. Sufflé came out in February 2011. Help Me was published in 2015.  The Time of Fall , 2016, novel; Flamingos are Pink, 2018, novel; The First Day of Separation, 2021, novel.

Anthologies Which Include Aslı Perker’s Works: