The Girl in the Tree – Şebnem İşigüzel 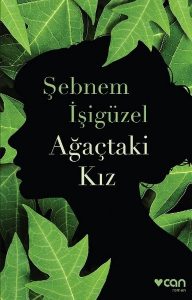 What is happening in Turkey? Would you be interested in hearing about it from a young girl? What was the whole deal in Gezi in 2013? What happened afterwards? What happened before? Can someone explain all this to us in an easily understandable way? The Girl on the Tree does just that. It gives voice to a world, to Istanbul where women are standing up against restrictions and one man governments.

We meet our protagonist in a quite unlikely setting. A setting that no one since Italo Calvino in his book The Baron in the Trees have used this aptly. Our protagonist finds herself in Gülhane Park which is a palace garden with trees that are centuries old. She finds a remote tree to hide in. Gulhane Park and Topkapı Palace are divided by a wall built after the Fall of Istanbul in 1453. So our protagonist, traveling from the wall to the tree branches whenever she feels like it, tells us her story. And she does so in a lively, youthful and ardent manner. It is as if she is a bird, perched on those branches, singing for us. The fact that the chapter headings get their names from Twitter only underlines this tone.

The bellboy who works at the boutique hotel near, notices the Girl in the Trees. And so a love story  begins and spreads from emergency stairways to the wall to trees and finally to the roof of the Tiled Kiosk who leans against the historical wall.

These characters share the stories of their families; of their loved ones; of Istanbul; of Gezi Park protests and of the event that marked a turn in Turkey’s democracy:  2015 Suruc Bombing where young, innocent lives were directly targeted.

The Girl on the Tree hides her name from us. We learn that she is from a well-educated, middle class family and that she was born in 1998. When she talks about her childhood she talks about a society that was radically changed through politics: her journalist aunt who became unemployed, her dietitian mother, her aunt who decides the wear the hijab in order to help her husband’s political career, her father who gets fired from his job in the archeological museum… But surely the most unforgettable character in the novel is her grandmother who is no longer alive. She has left a very lasting impression on her granddaughter’s memory. She is one of the Rûm’s who witnessed the lynching of their people in 1955 September Events in Istanbul. And she shares what she saw with her granddaughter with unflinching honesty. Because as our protagonist came to believe “A secret is a bomb that gets dropped down on a home.”

The novel blisfully swings between the recent past and today. Our protagonist has very valid reasons for deciding to live out her life in that tree and her knack for such a lifestyle is undisputable. The bellboy she fell in love with at the beginning of her journey helps her. He is kind enough to give her a fur coat that gets forgotten in the hotel. So the young girl makes herself a home in a stork nest which creates an image that will remind the readers of Thumbelina in her bed made from walnut shell with a rose petal she used as a pillow. This is such a strong narrative that enchants us with its fairytalesque imagery while being completely believable with its story.

Our protagonist introduces us to a country that doesn’t like its young population, its own children, its women. She shows the behaviours of the park’s visitors as proof. She sometimes visits the empty room in the hotel to take her story even further. Infinitely elevated through its unique creativity, this novel presents to us; our day and age, the changing times, the oppressed, the ones who resist, the ones who rebel… Şebnem İşgüzel, without a doubt provides one of the most surprising and extraordinary visions in contemporary Turkish literature, sitting in a tree in Istanbul.