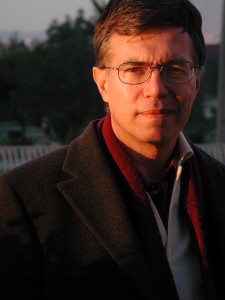 Levent Mete was born in 1958 in Izmir. He graduated from the Ankara Science Highschool and Hacettepe University Faculty of Medicine. He received the Turkish Psychiatry Association Resarch Award four times for his studies on schizophrenia.

He has written two reference books entitled Schizophrenia: The Remotest Land (İletişim 1998) and Depression: From Sadness to Melancholy (İletişim 1999), a book of essays called The World Passing Through the Street (Beşus 2002), and the novels The Man Who Wrote Romance Novels (İletişim 2000), Therapy (İletişim 2002, Can 2004), The Wizards (Can 2003) and Inside Rika’s Brain (Can 2005).

He also wrote the Psiko Şerafettin sketches that were broadcast by TRT-FM and had a column in the daily Birgün newspaper. He was one of the founders of the Internet magazine named “Impotent”. Currently, Levent Mete is the chief of the Psychiatry Clinic at the Atatürk Education & Training Hospital.