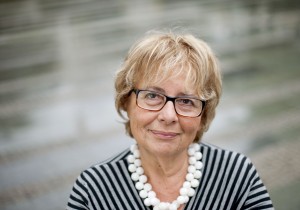 İpek Çalışlar was born in Istanbul. She graduated from the American Girls’ High School and Ankara University Faculty of Political Sciences.

She became a correspondant for the Turkish Radio and Television Corporation (TRT). When it became public that she had connections to organizations opposing the military coup of 12th March, she was arrested in 1972. She was imprisoned for 2.5 years at the Yıldırım Region Women’s Ward in Ankara. With the law of general amnesty passed by the Parliament in 1974, she got out of prison and went back to TRT.

After leaving her position there, she worked for the magazine “Nokta” which was the voice of the opposition in the 1980s as a news director; she was one of the founders of the short-lived magazine “Söz” and “Sokak”, known as a “boss-less” magazine. She lived in Hamburg from 1990 to 1992 and did research on homosexuality, women and Islam. Upon returning to Turkey, she took the position of news director of the newspaper “Cumhuriyet” and then she issued “Cumhuriyet Dergi” for 10 years.