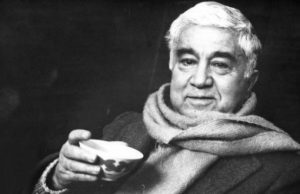 Aziz Nesin was born on January 2, 1916 in Heybeliada, an island close to Istanbul in the Marmara Sea. The son of an imam and a housewife, Nesin graduated from military school and military academy. During his career in the armed forces, Aziz Nesin served as in various cities in Anatolia. In 1944, he was condemned to a 10-month sentence because he granted a private permission to leave, and following this event he resigned from the armed forces. He returned to Istanbul and started running a grocery shop; but also took up writing and editing for the newspapers. Following this experience, Aziz Nesin discovered the joy of writing; relying on his earthy sense of humor and his instinctive humanism, he published pieces in various periodicals and newspapers. In 1946, he started publishing the humor magazine entitled Markopaşa. However, in order to prevent lawsuits and to maintain a sense of continuity, he frequently had to change the name of the publication. Nesin started writing books as well, each of which caused him to be investigated, arrested or sent to exile.

Aziz Nesin is the flagstone of humorous Turkish literature. Even today, many people consider his work as a guiding light. Every one of his books and stories displays the profound love that he feels towards humankind, and relies on black humor to make a commentary on the situation of the country. Whether they are acquainted with literature or not, any speaker of Turkish is typically familiar with at least one of his stories. Other than being a prolific writer, Aziz Nesin worked hard to contribute to the illumination, the modernization, and the democratization of society, especially during the last years of his life. He was a notable intellectual who was, to use his own terms, “paying dues to society.” Aziz Nesin led a number of intellectuals to take a stand against the military government, by issuing the Petition of Intellectuals (Turkish: Aydınlar Dilekçesi). He worked for several newspapers and published numerous books. His works were censored over and over; he was on remand for a total of over five years but was being discharged every time.

Aziz Nesin committed another one of his humanist acts in 1972, as he established the foundation Nezin Vakfı, which undertook the education of countless orphan children. On each opportunity, Nesin proudly stated that through the foundation he had countless children other than his own four. On July 5,1995, during a book-signing event in Izmir, Nesin died due to heart failure, and in accordance with his will, he was buried in an unspecified location on the foundation property. Aziz Nesin had stated in his will “I don’t want children to visit me on my grave and to be upset, in addition I have no intention of lying below a huge gravestone and to scare them.” Nesin had managed to put a bit of bitter black humor in his own death as well. Nesin is the foremost humor writer in Turkish literature, and has earned countless national and international awards. His works have been translated into over thirty languages. During latter parts of his life he was said to be the only Turkish author who made a living only out of his earnings from his books. The Europe-Primary School in Berlin-Kreuzberg was named after him.