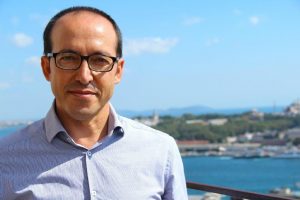 Burhan Sönmez is the author of five novels. His prize-winning novels have been published in more than forty languages, including French (Gallimard) and German (btb-Random House). He was born in Turkey and grew up speaking Turkish and Kurdish. He worked as a lawyer in Istanbul. He went to Britain for political reasons and lived there in exile for some ten years. He now lives in Istanbul and Cambridge. He has written for various newspapers like The Guardian, Der Spiegel, Die Zeit, La Repubblica. He translated the poetry book of The Marriage of Heaven and Hell by William Blake into Turkish. He lectured in Literature at the University of METU. He is a board member of PEN-International. Among many other awards, he received Vaclav Havel Award in 2017 and the EBRD Literature Prize in 2018.

Anthologies Which Include Burhan Sönmez’s Works: