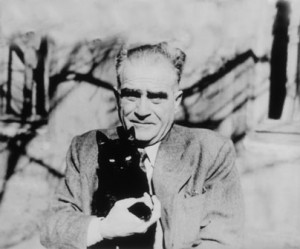 The most surprising writer of 20th century Turkish literature, Ahmet Hamdi Tanpınar created an amazing culture universe in his work, bringing together western forms of writing and sensibilities of a decadent Ottoman culture. The Time Regulation Institute is regarded by many to be the masterpiece of the Turkish literature World.

Ahmet Hamdi Tanpinar was born in Istanbul on June 23, 1901 and died in Istanbul on January 24, 1962. Due to his father’s duty as an Ottoman judge, Tanpinar spent his childhood in various towns and cities of Anatolia, and he returned to Istanbul in 1918 to pursue his higher education. He first attended the Faculty of Veterinarian Science for a year and transferred to the Darülfunun Faculty of Letters, where he studied history and then philosophy. Later, he transferred to the Department of Literature, because he wanted to take classes from Yahya Kemal Beyatli, whose work had great influence on him. During his university life, he studied western as well as Divan literature. He had the opportunity to learn the works of Divan poets Baki, Nefî, Naili, Nedim and Seyh Galip. In 1923, he graduated from the Faculty of Letters and was appointed to Erzurum as a schoolteacher. He worked as a teacher of literature at various secondary schools in Konya, Ankara and Istanbul. After the death of the renowned literary figure and academician Ahmet Hasim in 1933, Tanpinar was appointed to the Academy of Fine Arts as lecturer of art history. In 1939, he started working at Istanbul University as a professor of contemporary Turkish Literature. From 1942 to 1946, he worked as a representative of the province of Maras. From 1946 to 1948, he worked as an inspector for the Turkish Ministry of National Education. Afterward, he returned to his academic position at Istanbul University and taught fine arts and literature until the end of his life. The gravestone of the poet features his most famous verses: “I am neither inside time / Nor am I completely outside of it.”

"Those Outside The Scene", Bulgarian, Prometheus, 2019