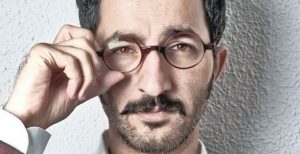 Murat Menteş was born in Istanbul in 1974. He began his literary life writing poetry, which he started publishing in the early 1990’s. He edited a weekly magazine “Gerçek Hayat” for six years. His novel “Korkma Ben Varım” (2009) was awarded by Turkish Writers Association. Since 2009 he has written for Star newspaper. He prepared and presented a culture program “Klark” on TVNET with Samed Karagöz. Menteş also reviewed movies for weekly magazine “Nokta” and worked as copywriter for national TV network TRT. Since 2011 he has been presenting the show “Nunchaku” on Standart FM with Samed Karagöz. Menteş wrote a column for Yeni Şafak newspaper in 2012-2013. He currently writes for the website afilifilintalar.com, which includes writers of different political stances and artistic approaches, with a focus on high culture, art and style. Menteş lives and works in Istanbul.