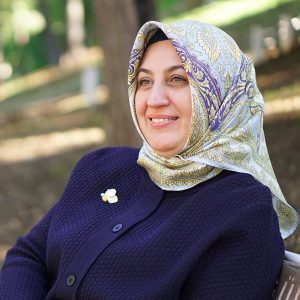 Melike Günyüz was born in 1968. She finished her primary and secondary education in Istanbul and then went on to study Turkish Language and Literature at Boğaziçi University. From 1992 until 1994, she worked as an English teacher. She obtained her master’s degree from Boğaziçi University in 1994 and her doctorate in 2001.

Between 1994 and 2012, she went from being an editor at Erdem Publications to becoming its editor-in-chief and later general manager. She still holds the position of editor-in-chief at the Sedir Publication Group. Her academic research is focused especially on publishing and children’s literature. She acts as vice president of the Publisher’s Association, and is a member of the Ministry of Culture’s committee for national fairs, as well as a board member of MÜSİAD and various NGOs. She has published more than twenty story books for children. She created school books for Turkish lessons especially for primary school children, which are maintained as standard works in professional circles. Günyüz also gives seminars for parents and teachers in order to help in developing a reading culture for pre-school and primary school children.