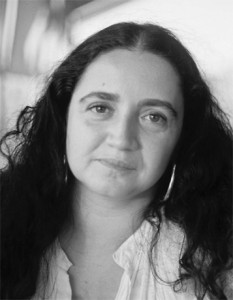 Born 1972 in İstanbul, Karin Karakaşlı graduated from Boğazici University’s School of Foreign Languages in Interpreting and Translation. She started to work at Agos newspaper and subsequently published two short story collections: Songs in Other Languages (1999) and Ruptures of the Soul (2002), as well as the novel Can I Hop Off at a Convenient Place? (2005), Oriel (2008), a collection of articles, and a poetry volume entitled My Silver Heart (2009), her book Four Pine Cones was published in 2014 by Günışığı Kitaplığı Publishing House and it was awarded as “2014 Youth Book of The Year”, her last book Insufficient Funds was published in 2015 by Can Publishing House

She became third in the 1994 Gençlik Bookshop Short Story Competition, which she went on to win in 1995. She was awarded the Yaşar Nabi Nayır Young Writers Prize in 1998. Karin Karakaşlı’s young-adult novel When The Moon and The Sea Meet was the author’s first book.

Karin Karakaşlı lives in İstanbul and is a lecturer at Yeditepe University’s Department of Translation.